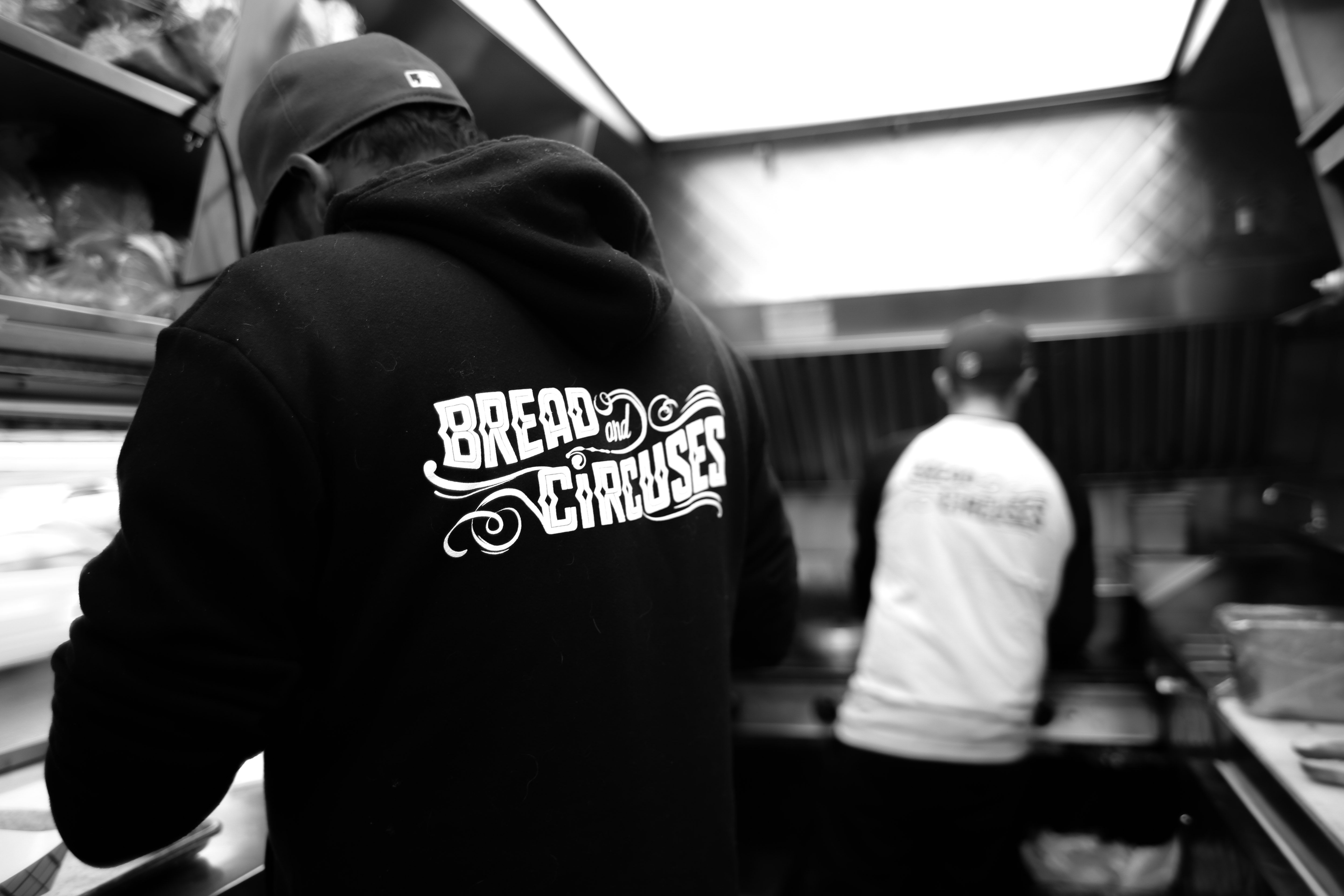 “You definitely don’t do street food to get rich. The margins are paper thin, and there are so many factors that you need to include in your price, from commissary rentals to truck maintenance.”

Food truck life isn’t for the faint of heart. For most independently owned and operated food trucks, you wear many hats, including the chef, mechanic, plumber, driver and even janitor.  Running a restaurant on wheels comes with it’s own unique set of headaches, but can also serve as a jumping off point for bigger things to come. In 2010, New Orleans born chef Matt Lewis started Where Ya At Matt? food truck out of a love for cooking his families traditional Creole dishes. Four years later he went on to open the wildly successful Roux in Fremont. Roz Edison and Kamala Saxton grew Marination Mobile from a food truck serving Hawaiian/Korean tacos, to now three brick and mortar locations. And before Josh Henderson was revered as one of Seattle’s top restauranteurs, he was slinging food in a converted airstream as one of Seattle’s first food trucks known as Skillet Street Food. Nearly ten years later Josh has gone on to open over ten new restaurants including Westward, Great State Burger, Quality Athletics and later this year, a rooftop bar and restaurant inside the new Thompson Seattle Hotel. Skillet meanwhile has become a powerhouse of its own, with four restaurants, three catering food trucks and even their own line of signature bacon jam. But that’s not to say any of it came easy. With razor thin margins, long hours and a fail rate higher than restaurant standards, food truck life can be just as risky as it is rewarding. We decided to delve into the minds of the owners behind some of Seattle’s best food trucks and learn what really goes on behind the scenes of street food in a new series we call "Food Truck Q&A"

Now when it comes to the food truck life, not many people know more about it than Syd Suntha. Working his way up the ranks of some of Seattle’s best food trucks, including both Skillet Street Food and Where Ya At Matt?, Syd has taken years of experience, a culinary degree and a passion for street food to create his own truck known as Bread & Circuses. In little over a year, that truck has not only become one of the top trucks in Seattle, but most recently opened a pop-up restaurant inside of Two Beers Brewing. We caught up with Syd to chat more about about what makes this food truck so unique and how it came to be. 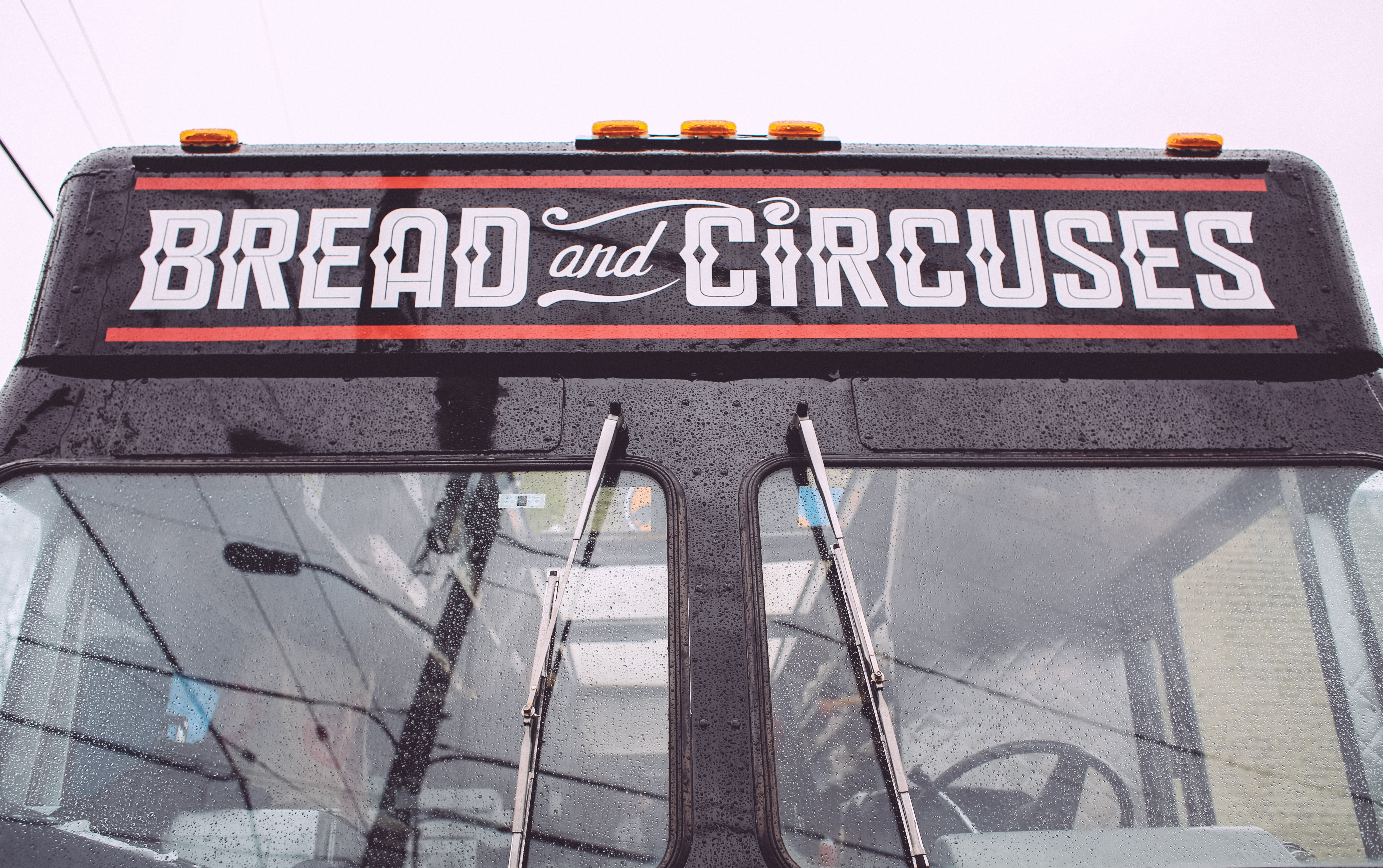 TELL US A BIT ABOUT BREAD AND CIRCUSES – WHAT ARE YOU GUYS ALL ABOUT?

I like to call Bread and Circuses “Gastropub” style. When we first started the truck, we were thinking about what theme to do, and Indian/Sri Lankan kept popping up. My fear with that was, we would be stuck doing that for the rest of our lives. Working with WYAM for a couple years, while the food was awesome, we were always stuck with those Creole limitations. I went with the Gastropub idea because it covers a wide array of cuisines, especially Indian. I knew we wouldn’t stop with the food truck, so it really allows us to flex our culinary muscles and have it make sense. 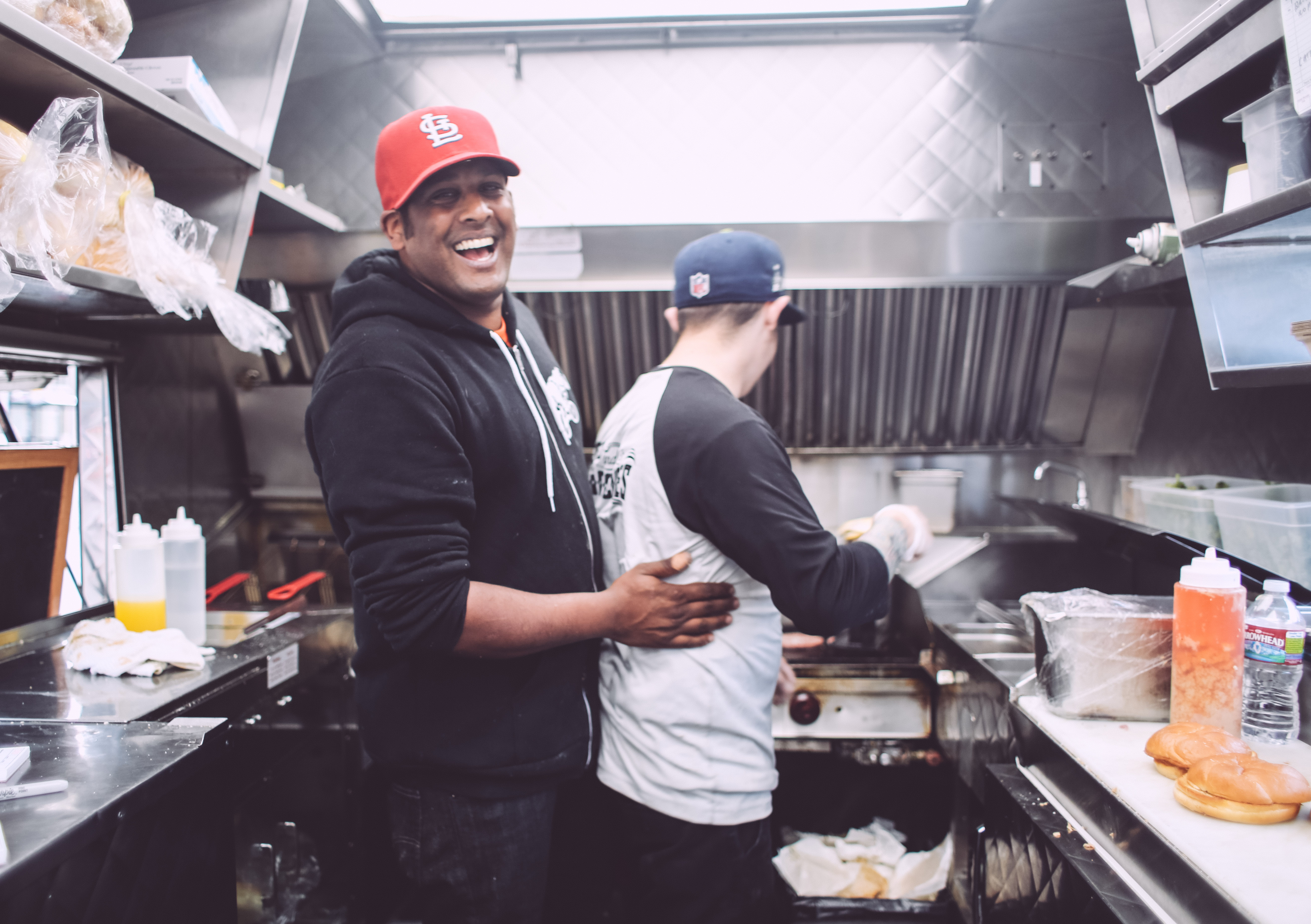 “I was scared shitless when we were getting things started, but a year later, I realize its the best decision I’ve ever made in my life.”

WHAT INSPIRED YOU TO OPEN A FOOD TRUCK?

James Barrington from Halava Fallafel and I had many beers at Chucks Hop Shop one night, and the idea just kind of popped out. I had been hustling for Skillet and WYAM for so many years, I knew all the angles, from how to get spots, how to keep food costs low, to how to set up catering events. I was scared shitless when we were getting things started, but a year later, I realize its the best decision I’ve ever made in my life.

WHAT IS YOUR FAVORITE STREET LOCATION AND WHY?

I would have to say Chucks Hop Shop Greenwood. My favorite thing about street food is being able to travel from different locations every day, and not just stare out the same window if you were working in a kitchen, but I could go to Chucks every day. Actually, I pretty much do, just without the truck most of the time. I love the location because everyone there is like family, from the workers to the customers. I’ve had customers bring me gifts when my daughter was born and I’ve had Chuck share some Utopias with me. It also helps that it's two blocks away from my house. 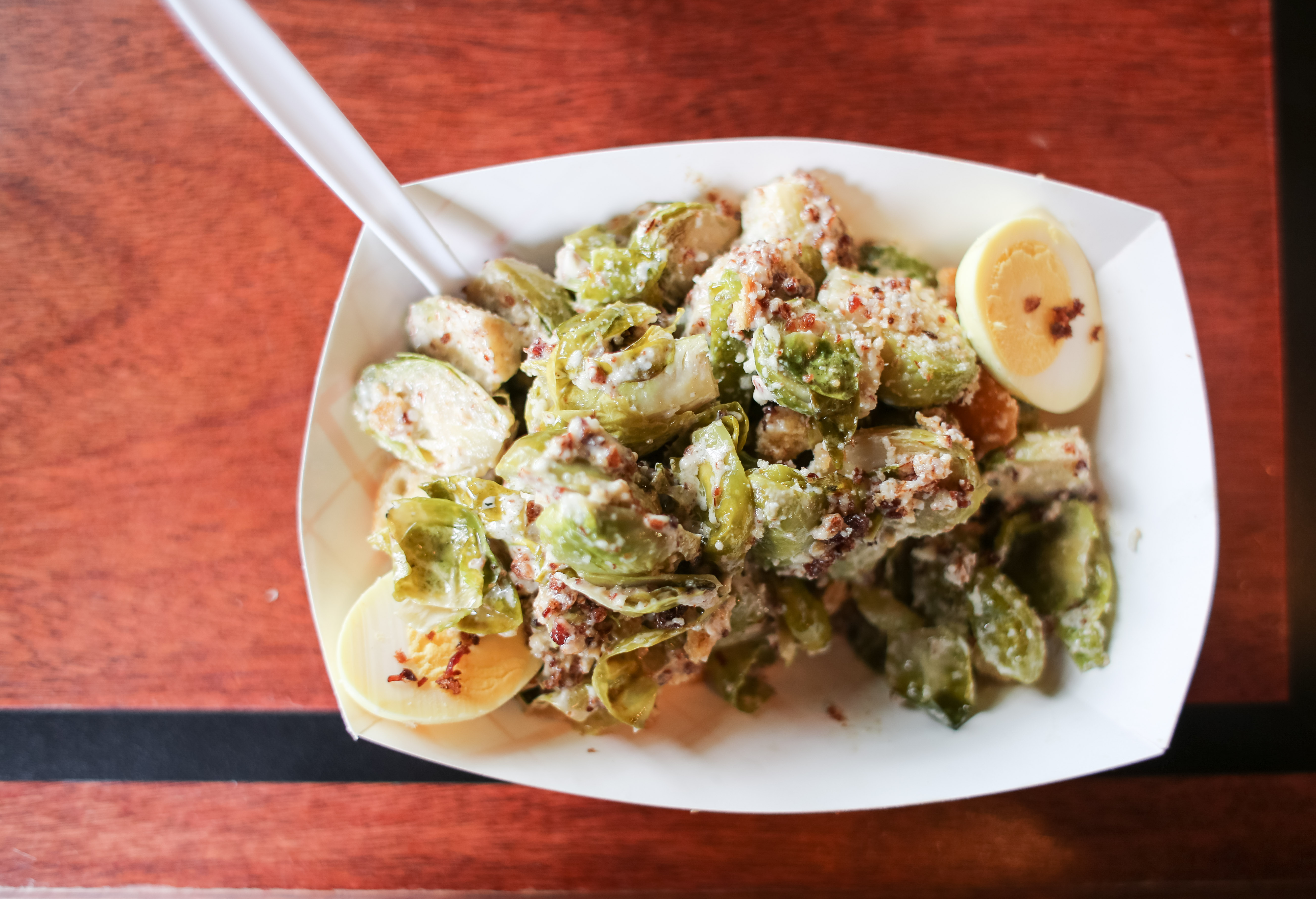 “We get a lot of comments in the vein of, “I hate brussel sprouts, but these are fucking awesome!”

WHAT’S YOUR MOST POPULAR MENU ITEM?

The Brussel Sprout Caeser. Chef Rob came up with the opening truck menu for the most part, but the Caeser was a collaborative effort. I used a couple of ideas from places I’ve worked and eaten at to Frankenstein the dish, and then Chef Rob threw on a peppercon pickled egg as a tribute to something his mom used to do. We get a lot of comments in the vein of, “I hate Brussel sprouts, but these are fucking awesome!”

A lot of the normal challenges that new trucks face came easy to me since I had been doing street food for 6 years before I started BC. The hardest part was probably just figuring out what we can do vs. what customers wanted. Most of us come from a fine-dining background, so we really wanted to do some crazy stuff off the truck at the beginning. Turns out most people just wanted the burger, which is a great one, but we were really hoping the scrapple (pig face) grilled cheese would sell better! The other hurdle is explaining to some guests why the food cost are what they are. Most guests are cool and get it, but sometimes you get the “Why is your burger $10 when I can get one for $2 at Burger King?”. You definitely don’t do street food to get rich. The margins are paper-thin, and there are so many factors that you need to include in your price from commissary rentals to truck maintenance. 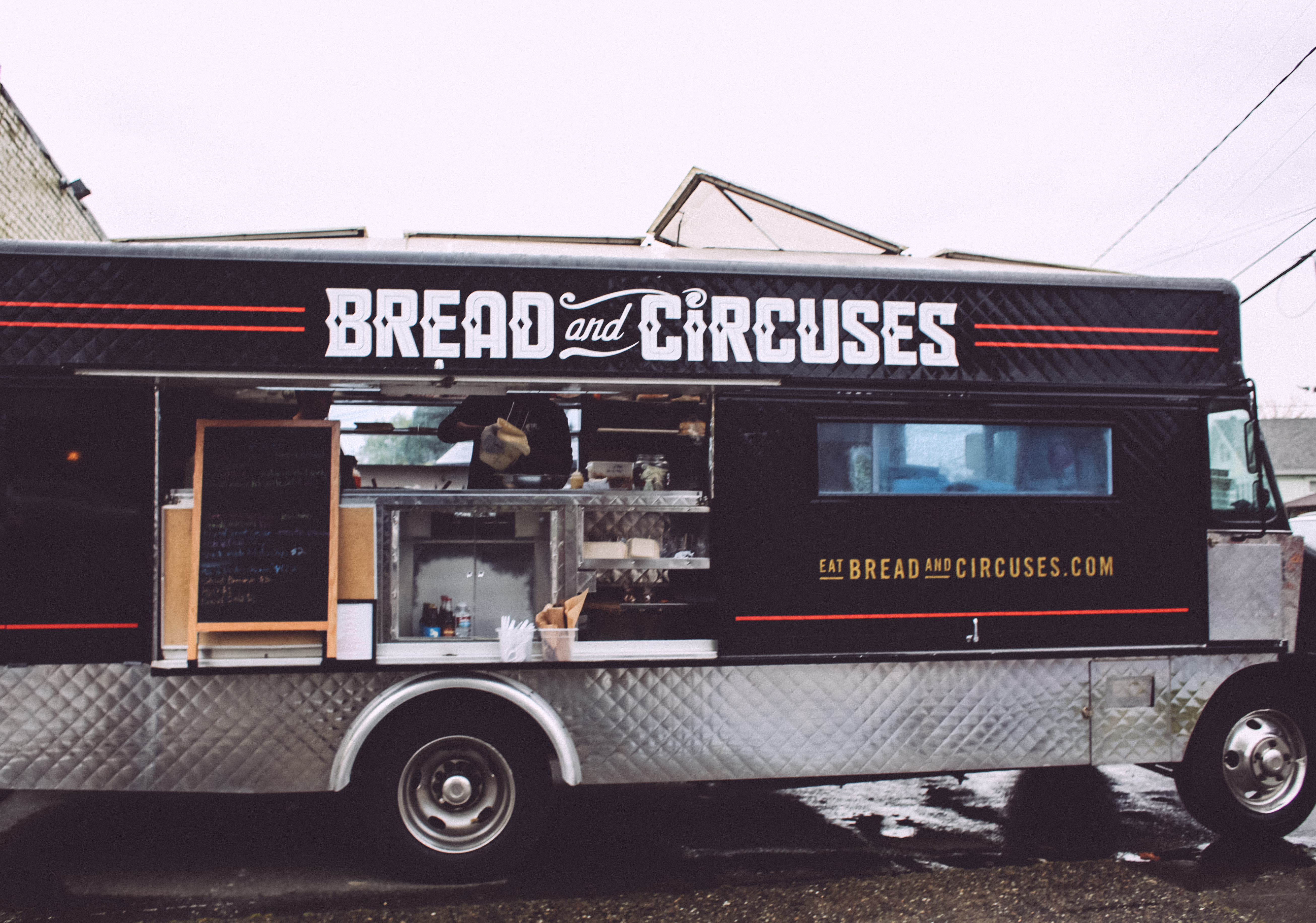 DO YOU HAVE ANY ADVICE YOU WOULD OFFER OTHER ASPIRING FOOD TRUCKS?

My advice would be to keep your hustle game strong. Street food is not like the movie “Chef”. You will not have 100 people waiting in line for you to open on your first day. You need to build up your clientele by putting out amazing food with great customer service. There a lot of hungry people in Seattle, and a lot of events, but you need to put your time in and know some days are going to be busted. You also need to factor all of the bad days into your business plan and come up with pricing that makes sense and won’t leave you broke after a bad winter.

WHAT’S NEXT FOR BREAD AND CIRCUSES?

We have one truck, and the pop-up restaurant located within The Woods, which is the tasting room for Two Beers Brewing and Seattle Cider. Our next project is Candy Butcher Hot Dogs, which will be serving at the Marymoor Concert series all summer long as well as some special events. In Late 2016 we’ll be opening a restaurant with Geaux Brewing in Auburn as well as Bellevue. After that, we have our eyes on doing a 2nd truck that will be running out of the Eastside primarily. We also have a few fun tricks up our sleeves in addition to those projects.

WHO WOULD YOU MOST LIKE TO HAVE A DINNER PARTY WITH? 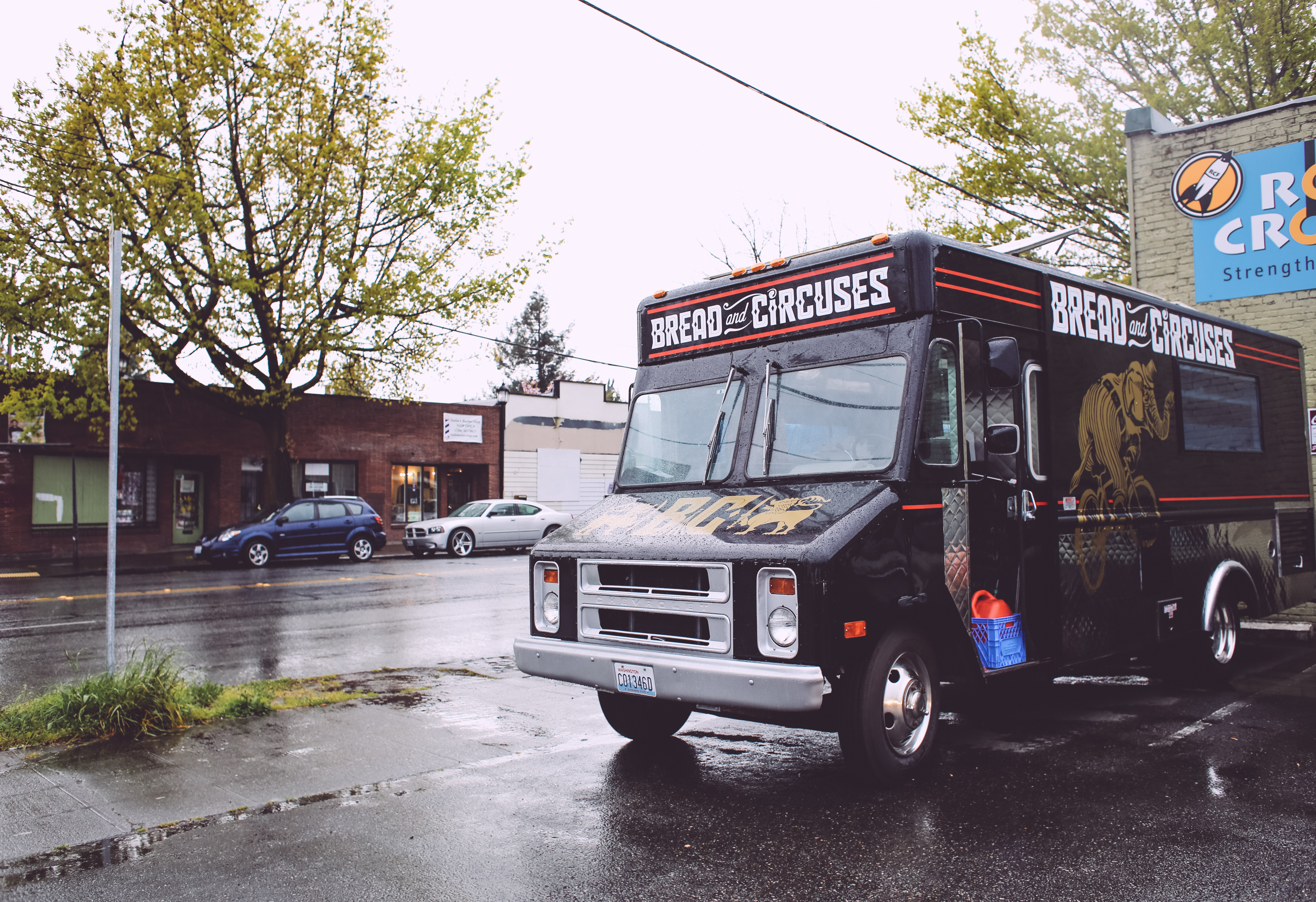 Think of us for your next event